Dec 2013 - So pleased to announce that I have signed with the Kate Nash Literary Agency. I have an agent!

Nov 2013 - After one too many glasses of something fizzy at the RNA Conference in July I agreed to do NaNoWriMo. I have to say that at the time I really didn't know entirely what I was signing up to. As November loomed closer I was doubting the doability of the whole thing.

But do you know what? I did survive and amazingly I have discovered that it is doable. I did loads of planning and had my novel mapped on my trusty cork board and a plan in Word to help me with the plot lines. When it came to it there I was every night with my head down writing. If I had a few minutes, I was scribbling. Lots of brilliant support from my lovely writer friends has kept me going - so THANK YOU!

And I am very pleased to say that on Thursday 28th November I went over the 50k mark having written 50,365 words in 28 days. Whoop whoop! 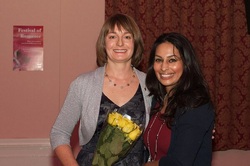 On Saturday 10th November 2013 I was named Runner Up in the New Talent Award at the Festival of Romance for the first chapter of my novel Acting On Impulse - I could not be more excited about this!
This is me with Sammia Hamer from Avon, HarperCollins who judged the competition.
Big congratulations to all the winners on Saturday and especially to Lucie Wheeler who won the New Talent Award.