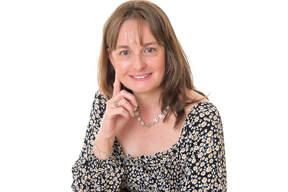 I've been jotting down my stories for as far back as I can remember... well that's not exactly true. I remember writing a story when I was about nine and I was in Mrs Hurran's class. The story was about a thief who stole the crown jewels but then didn't know what to do with them. It went on for pages and pages, in my spiders dance handwriting, so my teacher typed it up and pinned it to the classroom wall. It was a proud day!

Somehow life took over, I got a sensible job and the writing remained a hobby which other people puzzled over and which I adored.

Over the years there have been dalliances into poetry, short stories and five unfinished novels. But I decided that 2013 would be the year that was going to change. I joined the Romantic Novelists Association New Writer Scheme which gave me a deadline to chase - a full length novel had to be completed and submitted  for review by 31st August. I beat the deadline by a month!

In 2014 I secured a two book contract with Harper Impulse, part of the HarperCollins Group, and my first novel 'It Started at Sunset Cottage' was published in ebook format on 12th February 2015 and paperback on 23rd April 2015. It went on to be shortlisted for the Joan Hessayon New Writers' Award and the RNA Contemporary Romantic Novel of the Year 2016.

​My second book 'A Family Holiday' and my fifth 'A Walk in Wildflower Park' were both shortlisted for the RNA Contemporary Romantic Novel of the Year!

In 2016 I moved to Avon, which is also part of the wonderful HarperCollins family. My books are released in four digital instalments ahead of the whole story being published a few months later.

2021 saw the publication of two novels: a romantic comedy The Promise of Summer and a bookclub read The Library. The Library was published by a new publisher - Aria, Head of Zeus. 2022 looks like it will be just as busy with The Girls out in April and A Wedding At Sandy Cove being published in July. I can't believe these will be books ten and eleven!

In my spare time I love to read, cook with my daughter, plan holidays and rehabilitate rescue hedgehogs.

I am represented by Kate Nash of the Kate Nash Agency. Website: http://www.katenashlit.co.uk/​